I discovered clicker training in 2009 by reading some articles in horse magazines. Initially, I was very sceptical until I came across one article that described the scientific basis and validity across animal species. That’s what piqued my interest.

One Google search later, I had found Alexandra Kurland and ordered a first set of DVDs.

The first opportunity to apply clicker training presented itself early 2010. I’ll get to that in a moment.

But first I want you to meet Asfaloth.

Asfaloth - my own beautiful challenge 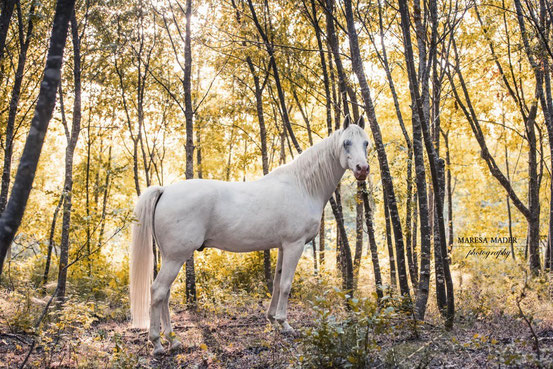 Probably very similar to you, I was a typical, horse enthusiastic girl. I spent all my weekends on local horse horse shows, not to watch the performances but waiting at the exit of the show ring. I was ‘preying’ on riders who were willing to entrust me their horses to ride after the test to cool down. You’d be surprised how successful I was. . Later, I was lucky to be given the opportunity to ride horses regularly for owners who didn’t have the time.

Why do I mention this?

I rode many horses but never had my own until I was (very) adult. In 2008, I decided that this may be the right moment to get my own horse. So I went searching for…

…a suitable barn. Before going horse shopping, I wanted to know whether there would be a place that would meet my requirements. I did, and I also found my horse.

Asfaloth came to me in January 2009. A 10-year old Arabian-Cross gelding, trained as a reining horse. He was beautiful, attentive and also very angry.

He could not stand still being tied, moving his hindquarters from side to side. He didn’t like hands near his head, threatened to bite when reaching for the halter and during saddling.

Riding was not without challenges. If you put him into a difficult situation, he would  often escape into uncontrolled backing, sometimes rear and was an expert in ridding himself of the rider by performing a sudden spin. It was all manageable but often not so much fun. In the arena, he could not trot, only jog, and there was no hope for a canter.

At that point in time, I did not see that as a problem. I was courageous and my intention was trail riding, I didn’t bother about flatwork.

But that was about to change. I found Anja Beran.